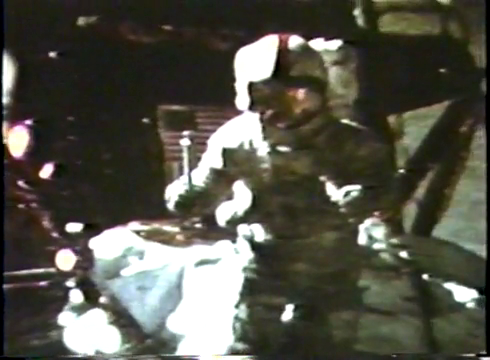 Courtesy: NASA
At the end of the last Apollo 15 moon walk, Commander David Scott (pictured above) performed a live demonstration for the television cameras. He held out a geologic hammer and a feather and dropped them at the same time. Because they were essentially in a vacuum, there was no air resistance and the feather fell at the same rate as the hammer, as Galileo had concluded hundreds of years before – all objects released together fall at the same rate regardless of mass. Mission Controller Joe Allen described the demonstration in the “Apollo 15 Preliminary Science Report”:

During the final minutes of the third extravehicular activity, a short demonstration experiment was conducted. A heavy object (a 1.32-kg aluminum geological hammer) and a light object (a 0.03-kg falcon feather) were released simultaneously from approximately the same height (approximately 1.6 m) and were allowed to fall to the surface. Within the accuracy of the simultaneous release, the objects were observed to undergo the same acceleration and strike the lunar surface simultaneously, which was a result predicted by well-established theory, but a result nonetheless reassuring considering both the number of viewers that witnessed the experiment and the fact that the homeward journey was based critically on the validity of the particular theory being tested.